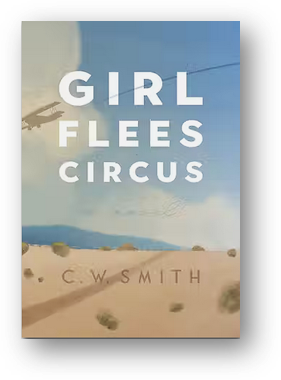 C.W. Smith is the author of nine novels, a collection of short stories, another of essays, and a memoir. A tenth novel, Girl Flees Circus, was published by the University of New Mexico Press in September of 2022 as part of the inauguration of the Lynn and Lynda Miller Southwest Fiction Series.

Girl Flees Circus opens late in the Roaring '20s, when 19-year old aviatrix Katie Burke appears out of the blue, crash-landing on the only street of sleepy No Name, New Mexico. Her biplane is upended, and soon, so are the lives of the people she encounters: a handome young mechanic who lives in a teepee; an 'old maid' schoolteacher who longs for Katie's friendship (and perhaps more); a daringly interracial couple who own the town's diner; a World War I veteran rocked by PTSD; and a bigoted sheriff who has suspicions about the plane - and the pilot. As her story unfolds, Katie's mysteries deepen, revealing shocking secrets, a scandalous past, and a future in true peril. Girl Flees Circus takes flight the moment Katie crashes to earth, promising a journey into the lives of a glamorous, redheaded stranger and the people she may change forever.